How do you measure up?

Investment decisions made by members are crucial to the long-term performance of Australian superannuation schemes, according to a new report.

Released by global funds management giant Vanguard, “How Australia Saves 2019” looks at how Australians are managing their superannuation savings.

While the good news in the short term is that median fund returns have been high, topping 10 per cent in 2018, the report also revealed that most members are failing to properly capitalise on this growth by relying solely on employer contributions to prop up their balances.

Australia’s superannuation system has grown to more than $2.7 trillion in assets since employer contributions became compulsory in 1992. It is the world’s fourth largest pool of private retirement savings.

Participation in the superannuation system is compulsory for all Australian employees, however most of us have a choice as to our preferred type of fund (for example, an industry superannuation fund, retail/public offer fund, or a self-managed super fund).

Members also have a choice as to how their superannuation savings are invested – for example into shares, property, fixed interest or a combination of these asset classes.

The report found that member investment decisions are vitally important in determining the long-term growth of retirement savings. A sufficient allocation to growth assets (such as shares) is a key component of ensuring that superannuation investments grow faster than inflation and cash investments.

The backbone of the superannuation system is the mandatory employer contributions for all employees earning more than $450 per month. The “superannuation guarantee” is currently set at 9.5% of earnings from employment.

However, while members are also able to top up their balances in addition to these legislated deposits, the Vanguard report showed that from 2016-2018 only 12% of working members made additional voluntary contributions to their super (salary sacrifice or personal after-tax contributions).

In 2018, the average member account balance of those included in the Vanguard report was $62,047. 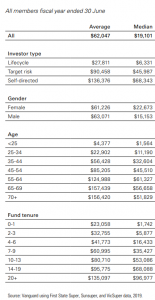 For many Australians, superannuation will be their largest asset outside of the family home. Current aged-based average account balances are relatively modest for those seeking financial freedom in their retirement years. Almost 90% of us aren’t saving any more into super than what our employer is contributing on our behalf.

As well as missing out on the benefit of additional long term savings, superannuation fund members are also foregoing potential tax concessions and government contributions that may further add to their bottom line.

The average investment performance of superannuation funds has been strong, and can be boosted by long-term investment in growth assets such as shares.

How do you measure up? Are you doing everything in your control to make your super work for you?

Taking more of an interest in your super savings now can have a big impact on your lifestyle in retirement.

Do you want to make the most of your money but aren't sure where to start?